Back to the top

Back to the top

Downtown Art Center at 1041 Nuʻuanu Ave. Second Floor, in Chinatown Gateway Plaza, is thrilled to host 'In the Elements,' an invitational exhibition featuring local Hawaiʻi plein air (outdoor) painters. The beautiful paintings, featuring outdoor scenes from around Hawaiʻi, will be on view during regular gallery hours from November 15-26, Tuesday through Sunday, 11 a.m. to 6 p.m.

The plein air style of painting gets its name from the French phrase "en plein air," or "outdoors," and refers to the act of painting outdoors. With Hawaiʻi's balmy weather and breathtaking scenery, there is no shortage of inspiration for this painting style, and the groups of artists who partake in it.

Some of the well-known local artists participating in this show include Dennis Daniel, Frances Wong, Mark N. Brown, Donna Sommer, Dwayne Adams, Spencer Chang, Annie Irons, and Jimmy Tablante. The exhibition opens with a third Friday reception on Friday, November 18, from 5:30 to 8 p.m.

The exhibition opens with a third Friday reception on Friday, November 18, from 5:30 to 8 p.m

The plein air style of painting gets its name from the French phrase "en plein air," or "outdoors," and refers to the act of painting outdoors. With Hawaiʻi's balmy weather and breathtaking scenery, there is no shortage of inspiration for this painting style, and the groups of artists who partake in it. 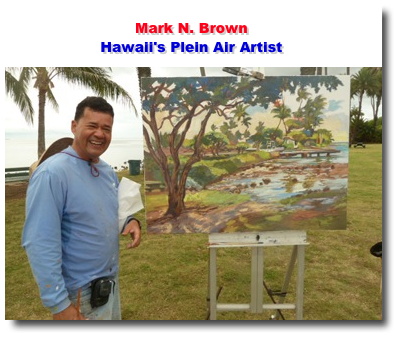 For more information about this show, and other exhibitions and events at Downtown Art Center, visit downtownarthi.org.

Located in the historic Chinatown Gateway Plaza building at 1041 Nuʻuanu Ave., Second Floor, the nonprofit Downtown Art Center is an evolving gallery and workshop space for Oʻahu's arts scene. DAC is a thriving center for the arts, providing display space for local artists and art organizations, creative classroom space, and more. DAC is dedicated to the revitalization of Downtown/Chinatown Honolulu through culture and the arts. Parking for DAC is located at nearby municipal parking lots (onsite at Chinatown Gateway Plaza, parking entrance off Bethel Street) or at Mark's Garage (entrance at 22 S. Pauahi St.). DAC is easily accessible by public transit as well; get directions, routes and timetables at www.thebus.org.